It has often been remarked that a feeling of peace, well-being, mysticism and purifying energy pervade the area of Borgo Santo Pietro and the Val di Merse in which it is situated.  It may be due to the abundance of water that can be found in the valley rich with woods, wildlife, flora and fauna, the river Merse being refuge to the last of Italy’s rare otter and extending many kilometers to the thermal healing waters of Bagni di Petriolo.

The village of Palazzetto is the neighbouring town to the estate, home to many of our food experts and locals whose connection to Borgo Santo Pietro goes back for generations, and who continue to share their native wisdom, talents, heritage, legends and local traditions with our guests.

A few kilometers away, the renowned Hermitage of Montesiepi can be found on a hilltop above the imposing Abbey of San Galgano which gives honour to the saint.  Galgano Giudotti was a Templar knight born to wealthy parents and renounced materialism and soldiering when he plunged his sword into a boulder, with only its hilt exposed in the form of the cross, a curious precursor to the legends of King Arthur and the Knights of the Round Table.  The saint is said to have miracles attributed to him and it was reported that after his death in 1181, his scalp continued to still grow hair. Twentieth century research has verified that the sword indeed dates back to the time of his life and two cavity like tombs lay below the hermitage’s foundations facing towards Jerusalem. In 1185, Galgano was declared a saint and erected over his hermit’s hut and final resting place, stands the round architecture with a graceful rotunda constructed with its striated dome of white stone and red brick reminiscent of structures of Etruscan graves, or of Rome’s Pantheon, or of the Templars’ adopted round architecture replicating the Dome of The Rock (Templum Domini) adjacent to where their Jerusalem headquarters were positioned after the city’s return to Christianity.  Since 1185, the Hermitage has never ceased to be a vital, frequented and active place. Recent studies have shown that directly under the center of its rotunda and the miraculous sword, can be found intersecting waterways deep below the hill, which may account for the Hermitage’s mysterious and potent energy, with one of the waterways continuing onward down to the Abbey of San Galgano, one of its veins leading directly to where its sacred altar would have been placed.

Just below the Hermitage stands the imposing Abbey of San Galgano, a spectacular ruined medieval abbey constructed between 1220-1250 by the Cistercian monks.  It was built to receive the overflow of pilgrims who travelled to pay homage to San Galgano. By the middle of the thirteenth century, the Abbey of San Galgano became the most powerful Cistercian foundation in Tuscany, its monks being placed in high offices throughout Tuscany.  The Abbey of San Galgano was Tuscany’s first Gothic church. Its implementation of the sacred geometric canons, not dissimilar to those realised in Chartres Cathedral in France, was later used as the model for the Cathedral of Siena. The architects designed the Abbey relying on harmonic geometrical rules dating back to Ancient Egypt whereby a pilgrim entering the Abbey’s front door would approach the altar, passing through a series of invisible triangles created by the geometric lines within its sacred architecture. Within these symbols and mystical vortexes, humans were included in a precise system of rhythm and harmony mirroring both the vibration of musical scales and of nature, and thus would find harmony within themselves.  It has been said that the architectural codes reached the monks through the crusade transit of the Knight Templars who brought this ancient secret wisdom from Jerusalem.

Present day studies show a constant presence of waterways under the Abbey. Dredging the marshy land to build the Abbey, the medieval builders knew the power of water and the presence of this element was essential to determine where the Abbey would be constructed and the waterways would flow in an ordered, often artificially predetermined manner to the church.  It seems water was used as an energy machine in its own right.

Six kilometers away from Borgo, the beautifully preserved medieval hilltop town of Chiusdino looks virtually untouched since San Galgano was born here in 1148, and in fact visitors can see his birthplace and examine the rock imprinted by his horse’s knees when it knelt before a vision of the Archangel Michael, or so the legend goes.  In the 13th century, the town experienced a period of great prosperity as its surrounding monastic settlements expanded throughout the area. Today Chiusdino is home to various artisans and a thriving local community, where guests can learn more about artistic legacy of the surrounding area at the San Galgano Civic and Diocesan Museum of Sacred Art.

Archaeological sites have been common on the valley floors, on the hillslopes and on the hilltops in the region of San Galgano and the Merse Valley, the area being inhabited since Etruscan times.   Being tied to the natural land, it is thought that the Etruscans may have planned roads to align with the various waterways. On the remains of the former Etruscan, Roman and Longobard roads, La Via Francigena dates to the fifth and sixth centuries A.D. and got its official role as the pilgrim road in the 10th century.  In centuries past, pilgrims, Templars, merchants, paupers, bishops, crusaders, Saint Francis of Assisi, and even the Great Charlemagne walked the Via Francigena to Rome and onwards to Jerusalem. As an outcome of these astonishing journeys, legends, myths and cultural exchange were important for disseminating ideas. Unlike Roman roads, the Via Francigena did not connect cities, but relied more upon abbeys. Like all medieval itineraries, the Via Francigena was not strictly linked to a single path, but extended into new territory with routes and variations that would bypass disease ridden or politically tumultuous areas.  In the case of San Galgano, the saint and his legend was a magnetic draw in itself. Not dissimilar to today, many of these pilgrims made their way to find refuge, healing and regeneration in the place that we now call Borgo San Pietro. 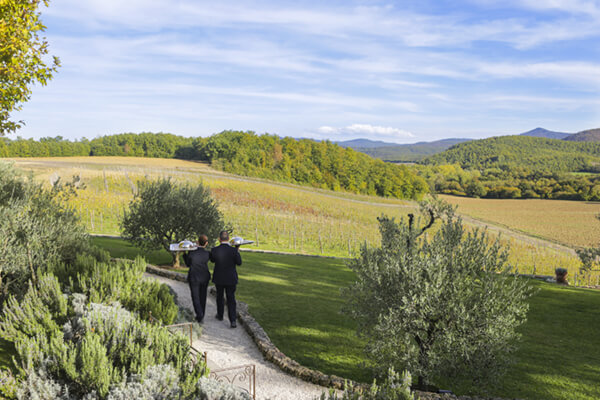